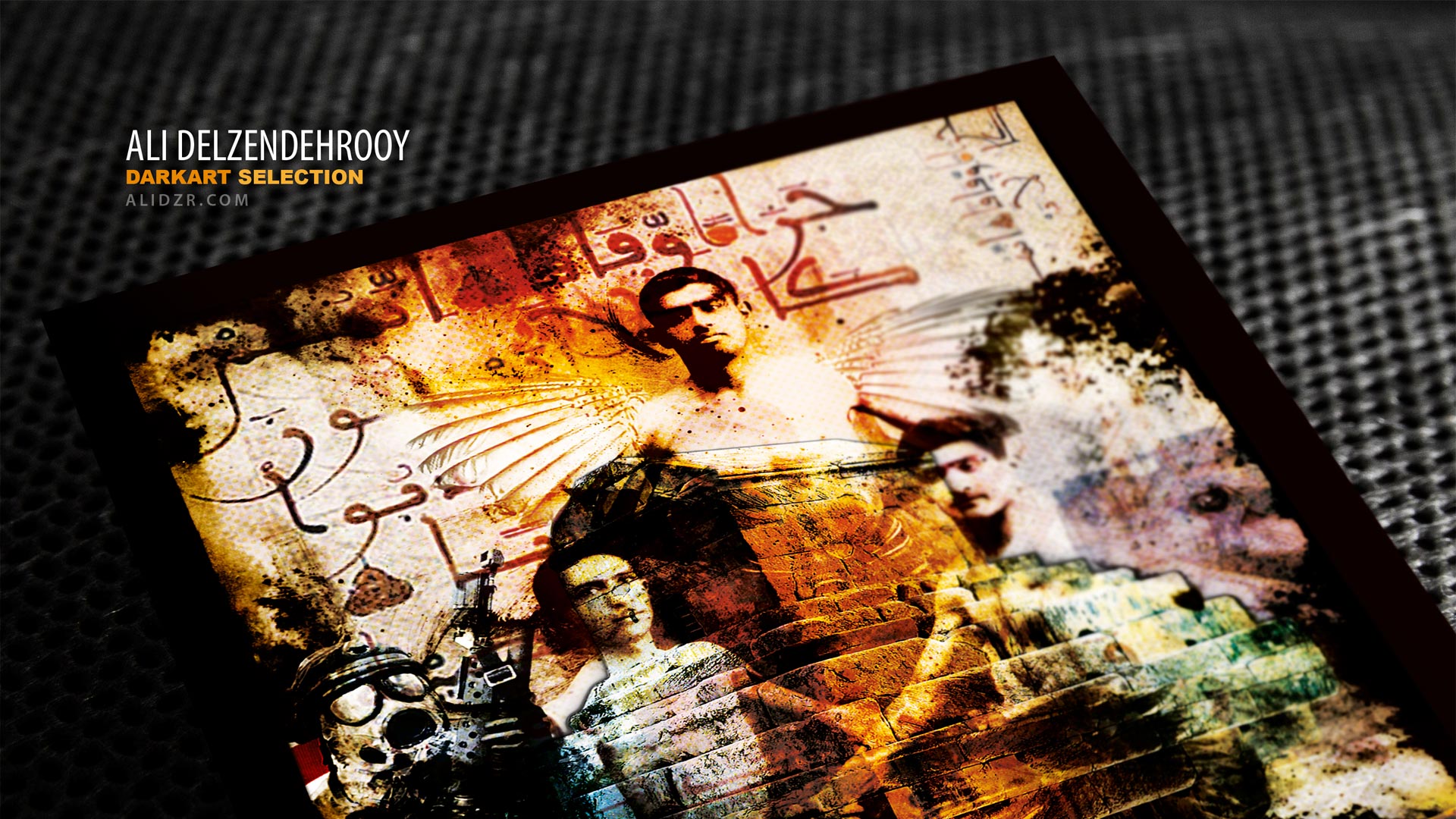 is a fusion of classic methods of photography, digital illustration, and graphic design, aimed to create artworks to protest filth and portrait humans’ evil nature by taking advantage of dark atmosphere. A style which presents symbols to its audience through particular visual concepts and is able to stimulate and measure their attitudes and insights.

Afdesta artworks can have similarities with different styles

-Expressionism: the existence of strong and replete colors, lines and edges with strong darkness, unique configuration of pictorial resemblance which shows stink of urban life, and the loss of humanity because of degeneracy to animal temperament and downfall into the morass of lying, bullying, extortion, greed, egoism, and etc.

-Abstract: presenting inner feelings via color and shape, textures that have been created with great precision and delicacy to be used according to the time and configuration of the title. For example specific contexts have been used to demonstrate stinking atmosphere.

-Symbolism: particular symbols that are used to induct the artist’s ideas and fantasies make the work tend to symbolism. In Afdesta style, due to the narration which illustrates for the audience in each work, specific elements and symbols are used with special arrangement considering visual configuration, golden spots, ponderous impact, and composition. These symbols have different sizes in each work according to their importance and the designers need for suggesting them more or less. For example, in an artwork, a symbol can been illustrated larger than the others in order to indicate its importance to the audience.

-Surrealism: illustrating non occurrence reality and soar of the artist to the realm of imagination.

-Postmodernism: surveying postmodernism options clarifies similarities between this method and Afdesta style although in postmodernism we are far away from human concepts, but in every single artwork of Afdesta method the artist takes advantage of human movements and human mental changes.

Given that digital illustration, a modern art with different methods is the main method of this style, and according to the range of styles and the multiplicity of visual elements, it is not possible to embed Afdesta style in a specific template. Considering styles of art and perception of artworks in Afdesta style, we cannot put all works under a certain style, for each artwork may contravene others’ style.

-Sketch: Idea implementation is the starting point for creating any pictorial artwork. Sketching enables the artist to implement an outline of his idea and composition at the moment, just like a quick note.

For Ali Delzendehrooy sketching is the first step of creating his artworks, in which he portraits fantasies of his perception, considering surrounding events. This process contains characters’ postures and gestures, locations, perspectives, angles of view, premature forms, and other key points which are the foundations of illustration. The second step for him is to choose a model which appeals his sketch and its development. This step is so important for the characterization of the artwork because illustration, due to its conceptual and visual content, needs processing. The designer would think of required themes and concepts for his artwork and choose the best visual option according to his mentality and creativity, and also whatever he wants to inspire the audience with. For Ali Delzendehrooy, it takes plenty of time (sometimes a few months) to complete his illustrations because of his extreme obsession for reflecting his imagination through image.

Each and every point contains a meaning for the audience, depending on his understanding and point of view. So we can come into a comprehensive and general concept by putting every single element of an artwork together. The third and also last step of this phase is to design the location, proper lighting, and accordingly a convenient background which would be able to convey the designer’s attitudes to the audience identically. The artist must then take a photograph of the scene and prepare slides for appealing sufficient preparations through specific soft wares.

-Performance and Tools: Artists use different tools for their performances due to their expectancy from the atmosphere, concept, and beauty. Nowadays, professional cameras, computers and various graphic soft wares have minimized the needs in illustration and photography. Camera, location, lighting, and slide preparation are tools for Ali Delzendehrooy’s performances.

-Techniques: Lots of techniques can be used for illustration, either traditional ones (watercolor, colored pencil, oil paint, and etc.) or digital ones (softwares and computer gadgets). It is also possible to create an artwork with the combination of traditional and digital techniques by scanning the handy sketch and work on it by soft wares.

According to Hamid Tabatabaie (graphic designer and illustrator) Ali Delzendehrooy’s technique is called Photo Manipulation (editing images by special skills) that is to edit, retrieve, and combine photos with any visual element. This method is known as Photo Montage in photography. Previously, photo manipulation techniques would have been performed in the darkroom on photo negatives by retouching photos with special colors and inks and combining negatives, but now professional softwears have increased speed and quality in illustrations.

-Style: In illustration, the atmosphere indicates artist’s ideology and style. According to Hamid Tabatabaie, the atmosphere of Ali Delzendehrooy’s artworks tends to the dark art.

Dark art is the art of transferring dark inner feelings through their combustion into the characters and atmosphere of artwork. Picturing these atmospheres is usually combined with inner protesting and critical movements (sometimes harsh, by using sharp and exciting colors), solitude, mockery, and etc. 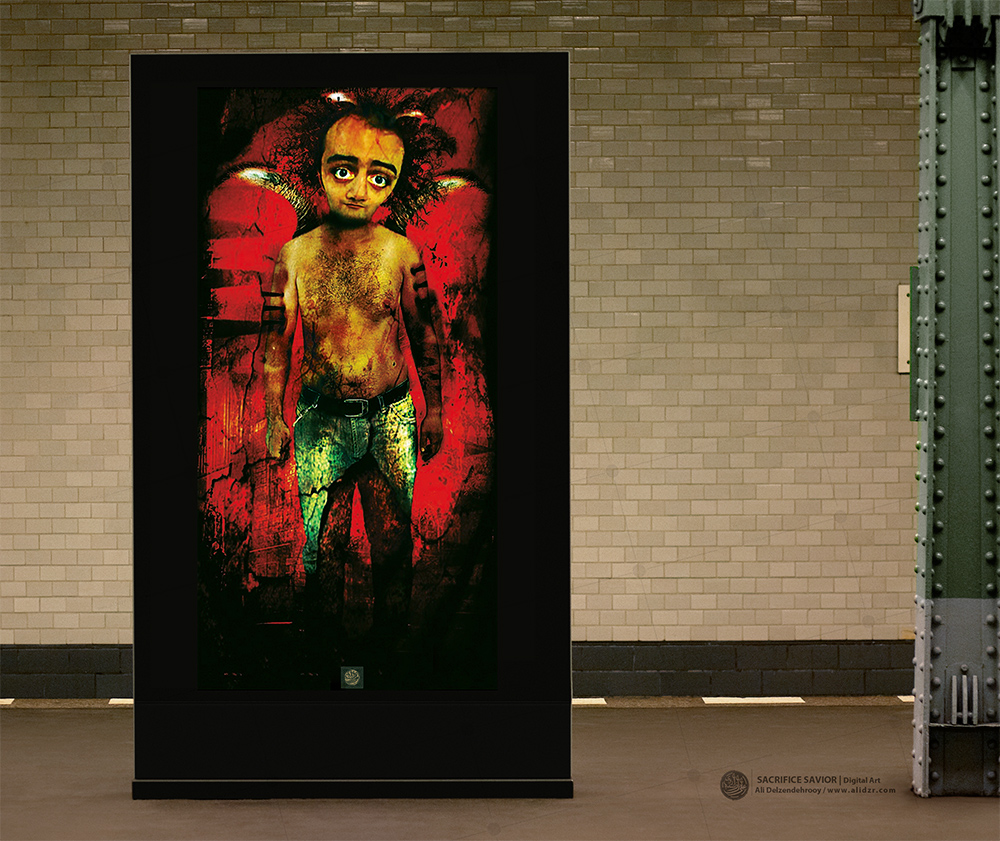 Conclusion and the Naming

It is possible to recognize a general scheme of the style and performance of the Afdesta Artworks through their similarities with other well-known styles. Which are mentioned here, but according to the studies performed by masters of graphic and illustration on works of Ali Delzendehrooy and with regard to the majority. We can claim that the perception of his artworks is unique. Because of the specific atmosphere and style he is developing which is a fusion of classic and modern styles.

These artworks are not limited to a particular time, place, and climate, but generally they include human behavior and relationships formed among. Humans which may sometimes be closer to a specific time or region according to his mood and imaginations of the time. Similarity of the artworks to the above styles, and professional illustration styles, along with their particular specifications and unique atmosphere leads us toward choosing a name for this style after sufficient studies and considerations. Afdesta is a Persian compound noun which means “the most wonderful way of praise” has been chosen for naming Ali Delzendehrooys style. This compound noun derives from “Afd”, meaning wonderful and extraordinary, and “Esta”, meaning to praise. 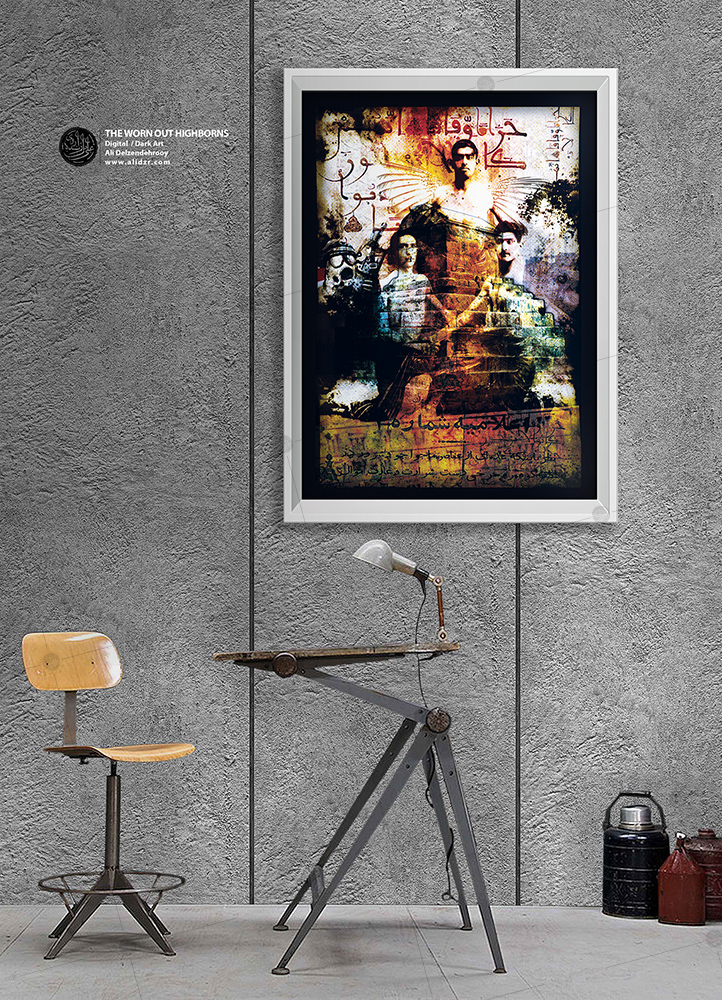 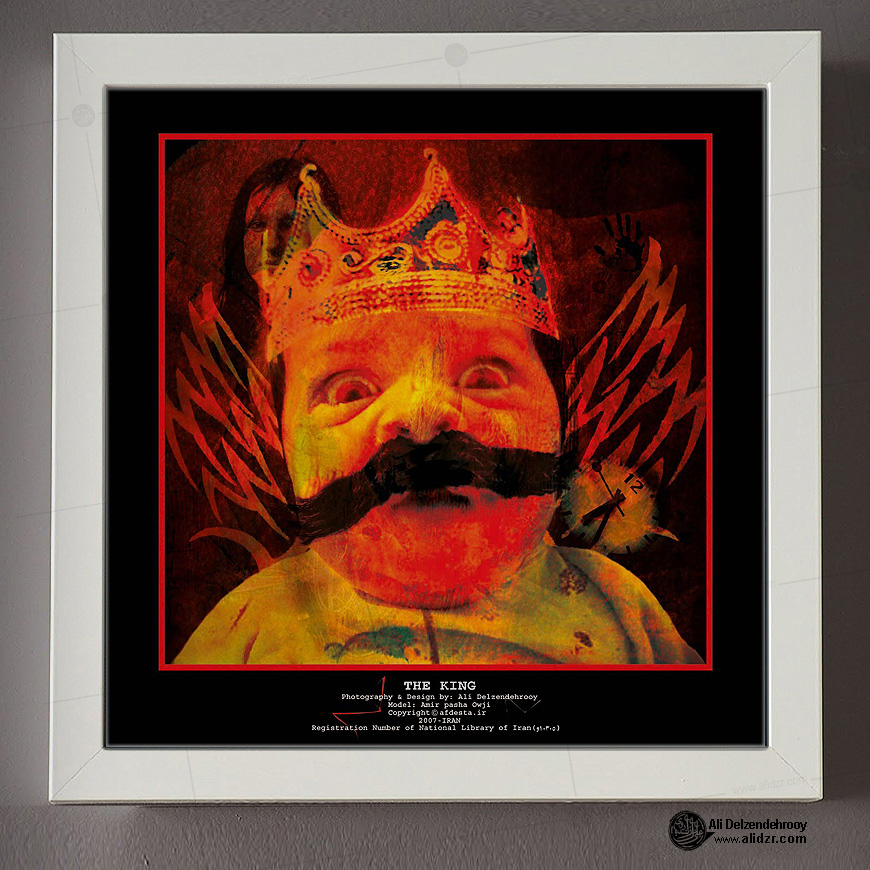 Attention: The full ownership of all the works on this page and all the artworks published by Ali Delzendehrooy – ALIDZR on his official website or other social pages belong to him and are copyrighted.
Any reproduction, copying, or misuse of these works is a violation of copyright law and will be prosecuted by the judicial authorities.

BACK TO ALL PROJECTS